Showing posts from February, 2011
Show All

February 13, 2011
Harry Price is probably the most famous of all ghost hunters and paranormal investigators, certainly in the UK. He is most notorious for his involvement with the case of the famous Borley Rectory haunting. He was born in 1881 in London. There is detail about his life here: http://www.harryprice.co.uk/ There is lots of interesting information about Borley Rectory here: http://www.ghost-story.co.uk/stories/borleyrectory.html http://www.borleyrectory.co.uk/ and certainly there are more informative links online. Price is a fascinating individual and the story of his life and investigations is worth reading even if you are not a believer in the paranormal.
1 comment
Read more

Horror and the supernatural 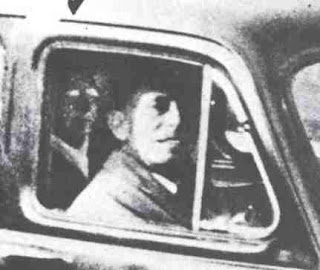 I've always been fascinated by stories of the paranormal and ghost sightings. The story of the "Amityville Horror" was one such terrifying 'real-life' story that scared me and caught my imagination. I also remember reading a book about hauntings and apparitions when I was a child at school. One of the photographs I saw in the book frightened me. It was this one: According to the man who took the original photograph, it had been taken when he and his wife returned from his mother's funeral. His mother, however, is the person who can be seen sat in the back of the car. She had, of course, been dead since three days before. Of course, it is an old and grainy photograph and the story may have been concocted simply because the image of the person in the back looks creepy and sinister. But...who knows?
1 comment
Read more

RedBubble Art slideshow (photographs I have submitted to the RedBubble website)

February 09, 2011
As a postscript, I was disappointed that John Smith did not answer seriously the question of what the renegade Indigo Prime operatives, Fervent & Lobe, had done to get themselves ostracised by Major Arcana. It was always a question that intrigued me, and will probably continue to do so!
Post a comment
Read more

February 07, 2011
As a teenager, I was a voracious reader of 2000AD magazine. One of my favourite writers for the comic and writers in the comic book and graphic novel genre entirely was John Smith. There is more about him and his work here: http://en.wikipedia.org/wiki/Smithiverse#The_Smithiverse I really enjoyed his "New Statesmen" series (dealing with genetically engineered 'supermen' who represented their US States as superheroes rather than politicians) and also all of the "Indigo Prime" series, about regenerated dead humans who are reborn as agents for the universe, dealing with malign influences and metaphysical problems within different worlds and entirely different dimensions. More about "Indigo Prime" here: http://www.2000ad.org/thrillpower/dcindigo.html It was disappointing that Smith became bored of the 'Indigo Prime' series as the characters were fascinating and the stories were well-drawn. Smith's ideas were brilliantly original and
Post a comment
Read more

My latest collection of short stories

February 03, 2011
For the last week or so I had been working on several short stories for my next collection. These will probably have to be put on hold for now while I work on "Staccato House".  I've surprised myself with how dark and twisted some of these new stories are ... I think that I'm currently doing a great job of scaring myself with them! The themes and content are much darker than the stories in my previous collection, "Beyond Twilight". I also think this next collection will show off a more sophisticated and mature writing style than the stories I used for "Beyond Twilight". Those tales covered the 2001-2010 period, nine years of my life. These stories will be written over a shorter time-frame and I think my writing has slowly improved from the hours I have been applying to the task of improving my technique. More news will be coming soon about that...and about my latest novels.
Post a comment
Read more

February 03, 2011
http://www.pageturnerprize.com/ My novel-in-progress "Staccato House" has been shortlisted in the Page Turner Prize competition for writing a novella in the thriller genre. The finished novella is due to be submitted for March 31st. If it wins, then I will have a publishing contract for writing three novellas. If it doesn't, then I will write all three as a single novel.
Post a comment
Read more
More posts